How To Do Dot-Matrix Printer Maintenance 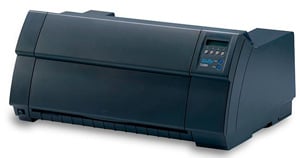 Follow these tips to keep your dot-matrix printer operational.

General Dot Matrix printer– A Dot Matrix Printer operates by a electromagnet keeping pins in place until a charge is made to a coil wrapped around a print wire, eliminating the magnetization momentarily, allowing the pin to spring forward placing a dot on the paper. This process is then repeated in patterns. The end product is all the dots lining up to create letters and other characters. There are two type of dot matrix printers.

For the dot matrix printer you need to clean the internal parts of this unit and you must put a lubricant on the moving parts of this machine, normally on the shaft where the print-head assembly is attached.

Carriage movement but no printing

No activity at all

One of the best ways to protect your dot-martix printer is with a printer service contract. Having a professional certified technician doing preventative maintenance and doing responsive repairs, can make a big difference.

Here at MIDCOM we offer Printer Protection Plans that offer replacement of your dot-matrix printers. Talk to one of our Printer Specialists now by calling (800) 643-2664.