Look out sports fans, there is an exciting new technology that is being used in football this year. A new partnership has formed between Zebra Technologies and the National Football League. Earlier this month the NFL announced that they would install Real Time Location Systems (RTLS) in over a dozen stadiums during the next football season. 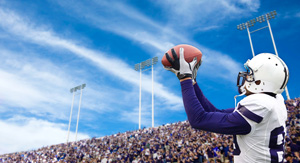 Among the 15 stadiums to serve as host to receivers, which will be installed among stadiums, include Carolina, Atlanta, Baltimore, Denver, Green Bay, Chicago, Cincinnati, Houston, New England, Jacksonville, Miami, Oakland, Washington San Francisco and St. Louis. These receivers will detect small, palm sized Radio Frequency Identification placed within the football uniforms. Thirty-two teams will be participating in the event, and it sounds like a dream come true for sports fans, or fantasy football enthusiasts.

The NFL spokesperson, Vishal Shan, Vice President of Media Strategy, has quoted, “Working with Zebra will give fans, teams, coaches and players a deeper look into the game they love. Zebra’s tracking technology will help teams evolve training, scouting and evaluation through increased knowledge of player performance, as well as provide ways for our teams and partners to enhance the fan experience.”

Zebra Technologies Corporation offers new innovations to technology, and gives insight and quantifications to organizations investments and assets. To learn more about new Zebra products call us at (800) 643-2664 or follow us on Facebook, Twitter, Google+ and LinkedIn.