While the iPad® is truly a technology advancement in personalized tablets, does that, in reality, make it a true business tool that can stand the rigors of the work environment? Is the iPad® rugged enough?

The answer is a resounding NO!

Of course, the Apple iPad® has a nice sized screen and it has Internet access through Wi-Fi. But that is only a fraction of the capabilities required in most work environments. I cannot tell you how many times my company has used the wrong product for a job. They thought they could save a couple of bucks but in the end only frustrated their employees and had to spend more money to fix their mistake. 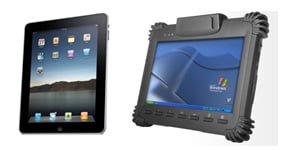 From my experience, the following is vital when utilizing tablet PCs in applications for First Responders (rescue, police, fire, and ambulance workers), for mobile workers using tables in sales force automation, in field service repair, for utility workers, in manufacturing and distribution centers, in delivery trucks, and any other areas in which the tablet is being used in business environments.

Here are some observations I’ve made about what makes a rugged mobile tablet:

Take it from someone that has worked in harsh environments. You want the right product so you can get the job done. Give your employees the proper tools for the job so they can work more productively, faster and safer.

iPad is a registered trademark of Apple Inc.