Save Money and Boost Efficiency with Rugged Tablet PCs

We’ve talked about the benefits that technology brings to improving the efficiency of delivery companies through GPS and communication devices, and today we’re going to talk about the benefits of equipping your employees with rugged tablet PCs.

When working in the field, many companies have found that completing what would be their normal “paperwork” has been replaced by computing, saving money on printing costs and boosted efficiency by 35% in one case.

That case was Pinnacle/CSG, a construction management firm that decided to conduct an experiment. The experiment: Figure out how beneficial or detrimental switching from paper to digital could be for their business. The guinea pigs: 10 of Pinnacle/CSG’s superintendents in the field. What they found was that by replacing traditional pen and paper with rugged tablet PCs, they were able to conduct their job much more efficiently while also saving on printing costs. 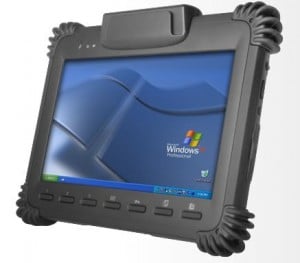 But, first they had to choose which tablet they were going to use.

“We did a lot of research. The iPad was hot at the time, but we needed something Windows-based,” says Cory McFarlane, chief visionary at Pinnacle/CSG.

The reason for needing a Windows-based tablet was due to the already integrated software that they were using in their day-to-day operations only being available on Windows. On top of that, the iPad didn’t cut it in terms of ruggedness and its ability to withstand the harsh conditions of a construction site.

So, they landed on the right rugged tablet PC for their needs and began the testing phase. The testing they did with ten of their superintendents proved a few things to them. First, the fact that the tablet had not only a back-facing camera for them to take pictures of the construction site and upload them to their software, it also had a forward-facing camera, allowing them to video chat with staff on opposite ends of the country. Second, the ability to type up all of their information straight into their software, instead of writing it on paper, and going back to the office and transferring the information into the software later, enabled them to be more efficient, 35% more efficient, with their time.

Though, not everything can be digital, but that posed no problem with their tablets.

“At the end of the day they go back to the trailer, dock the tablet, and print anything that needs to be on paper, like compliance reports,” McFarlane says.

Through all of this testing and research, Pinnacle/CSG concluded that for the continued improvement and growth of their business, taking advantage of readily-available technology is the best way to making that growth a reality. What other ways have you seen improvements in your business? Was it thanks to technology?

We can help you pick the right rugged tablet pc for your business. Call (800) 643-2664 and talk immediately to a helpful representative.